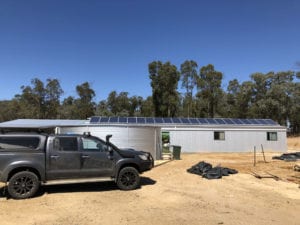 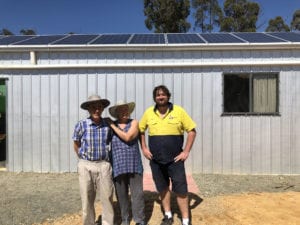 For some, going off-grid is a life long dream, for others it is a more recent passion. When Daryl suddenly found he had more time on his hands than he was used to, it became important to him to invest his time in living a more “natural sort of life” and that included getting off the grid. He moved to a property in north-central Gippsland, put up a honking big shed to be used as temporary accommodation, and started building his new home.

Rockys Solar played a part in Daryl’s lifestyle change by installing Solar Power, Battery Storage and a backup generator on his property. We installed 21 Jinko Solar panels, Australia’s best value for money solar panels (And one of only two panels to rate in the “Excellent” category in testing conducted by the CSIRO & Choice Magazine in 2017), 2 x 4.4 kW Selectronic Inverters, 10.24kW of BYD lithium batteries and a Pramac 6KVA auto-start diesel generator.

Daryl says off-grid is the only way to go moving forward and believes dependence on the grid is unwise when something like natural disaster or an attack could wipe the grid out.

In addition to concerns about large scale damage to the grid, there is growing concern amongst Victorians, particularly those who are totally power-dependent like our local dairy farmers, when power generated on-grid is becoming less reliable. There has never been a better time to move to solar power with generous STC rebates from the government still available and prices of Solar Panels and Battery storage options dropping. Whether you want to stay connected or take the leap to off-grid energy independence, talk to Rockys Solar today about your options.