“When we change the way we think about the cost of power, we can see opportunities.”

The MDF first investigated the viability of installing solar back in 2009 when they were given a grant to analyse the impact of the carbon emissions trading scheme on dairy farming. At the time, solar proved too expensive and the MDF recommended that farms not move in that direction, despite a good feed in tariff at the time.

Earlier this year, Rockys’ CEO Brett Hekman advised the MDF that with so much progress in the industry it was time to take another look. Now MDF Chairman Neil Baker says, “The quality of the technology, the cost of the technology and more importantly, access to finance, these three things have come together beautifully and made this a no brainer.”

Despite having an existing relationship with Rockys, the Board of the MDF did plenty of research on the quality and costs of the products proposed before engaging Rockys to install the solar system. “I’m completely blown away with the technical aspects of what Brett proposed,” says Baker. “The installation process has been painless,” he says, “The electricians working on the installation were great. From start to finish it only took about three weeks and it’s a really neat job. It looks good.” Baker adds with a laugh, “Now I have to go an make the fences look better because it’s dragging the whole thing down.”

“We did a bit of homework and had discussions with Brett about a few things because you hear so many stories about dodgey brothers’ solar that stops working in no time and we wanted to avoid that.” He added, “It’s so important to buy local because there’s always someone on the end of the phone. It’s also awesome the level of monitoring that Rockys can do on our system so they can tell us when there’s something wrong that we otherwise might not know. It’s fabulous.”

“The warranty on the products is also good, we don’t want to have to spend a lot of time maintaining, if all we have to do is get out a sponge and a mop now and then to clean them, that’s great.”

Because the MDF is a research and demonstration facility that is often open to the public, the appearance of the solar was important. They didn’t want solar on every bit of roof space and also wanted to reduce any safety issues associated with regular cleaning of the panels so they were prepared to pay extra to install the ground mounted system. Baker says, “Now that it’s there, I think it makes this awesome statement and people will be very excited to look at it.”

“I’m a bit surprise how small the system is,” Baker says, “I expected we’d have to cover a hillside to get the kind of generation we would need.” 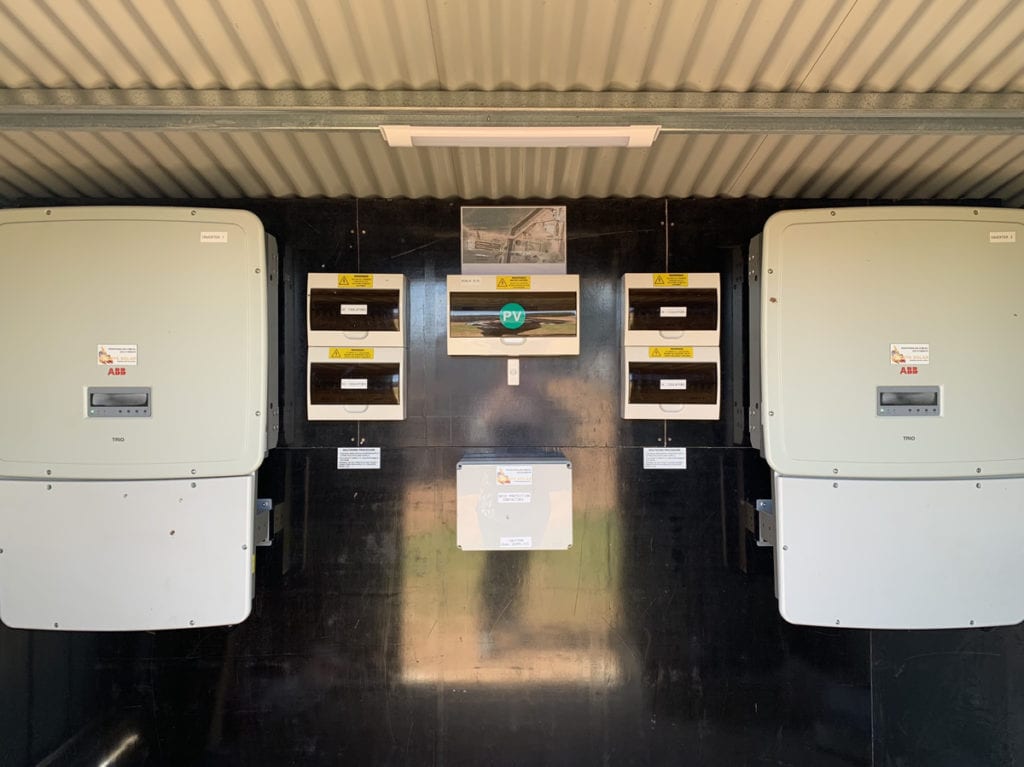 Under the financing agreement the MDF has they are paying what they normally would on the cost of electricity towards their installation cost and expect the payback time (including the extra cost of ground mounting the solar system) to be about 6 years. “This fixed cost is a great advantage, we no longer have to factor in increasing power costs, and once the system is paid for we will invest what we save in other research and development projects for the farm,” Baker says.

Having solar power installed has fostered a new approach to thinking about how things are done on the farm. They are considering a different approach for everything from milking times, to crushing grain, and irrigation methods. Tasks that would normally be relegated to off-peak times can now be done during the day when free power is available which also saves on labour costs. Being able to run sprinklers at no cost during the day when visibility is also high is a great advantage.

Baker’s only regret is that they were unable to install battery storage right away. “From a demonstration point of view I think that’s important. Batteries will enable a reliability and continuity of supply which is particularly critical in areas that experience frequent interruptions to grid supplied power without the need for massive generators,” he says.

The ability to expand the system and add more generation capacity in the future will allow for an increase spray irrigation and other developments that the MDF board hadn’t considered a viable option in the past.  “Adding extra spray irrigation would enable us to grow so much more grass, which is money in the bank,” Baker says. “When we change the way we think about the cost of power, we can see opportunities.”