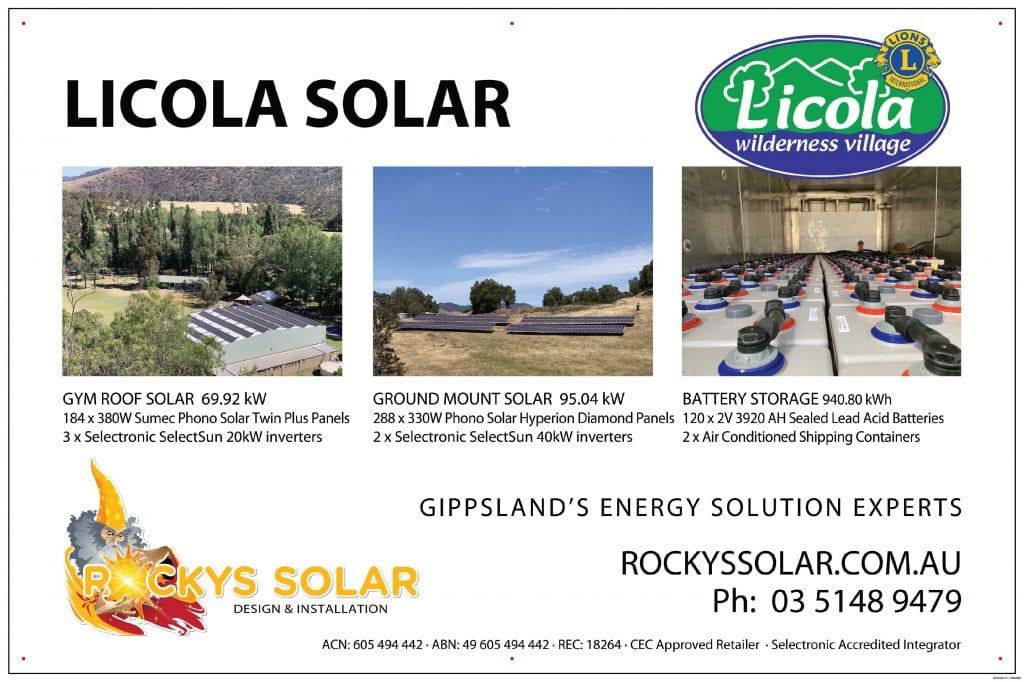 Rockys Solar have been so good to work with. There were many challenges presented by the remote location (That was once a river bed,) and without these people this project would not have run as smoothly as it has and it would not have delivered what it is going to deliver to Licola, which at the end of the day is a 90% saving in energy costs. The guys have done an amazing job.
–Tony Davis, CEO, Licola Wilderness Village

After 50 years of reliance on diesel generators, the remote village of Licola nestled in Wellington Shire’s high country in Victoria’s East has made the switch to renewable energy with the installation of a 165kW completely off grid solar system.

Providing power to all of Licola including the 35 acre Licola Wilderness Village (16 cabins, staff accommodation and common areas), CFA sheds, public toilet block, BBQ area, the store, Caravan Park and 3 residential homes. The off grid solar system was officially commissioned as part of the 50 Year Anniversary of the Licola Wilderness Village on Saturday November 23, 2019.

Removing dependence on CO2 producing diesel powered generators has allowed the Licola Wilderness Village live up to its nature-loving name. In addition to cutting emissions, the solar powered system allows residents and visitors to enjoy the peaceful and idyllic surrounds to the fullest, without the constant hum of noisy generators in the background.

Looking towards the future, solar was identified by the board of management as a financially viable project for the organisation. The idea of sustainable energy and reduced carbon footprint is hugely important the ultimate goal of the project is to protect Licola’s long term financial future .

Until the solar system was installed, the village was spending $135,000 in fuel and diesel maintenance annually. Expected to completely pay for itself in 6-7 years time, the solar installation moves the Village towards a secure future with uncapped potential for growth.  The savings realised by the project will provide the ability to upgrade facilities and bring more of the special needs, disadvantaged and at risk children it supports to the village, including during the cold winter months, as they are now they are able to run reverse cycle air conditioners in all the cabins.

With monitoring set up in multiple locations on site, the solar system will also become an educational tool for children visiting the site.

The solar generation is backed up by 120 Sonnenschein A602 3920AH sealed gel batteries weighing a massive 35 tonnes and stored in two insulated and air conditioned shipping containers.

Two of the existing generators will be kept on site and used occasionally when additional power is required.

Three Australian designed and manufactured Selectronic SP Pros form the brain of the solar system which is programmed to coordinate power throughout Licola. The Selectronic system incorporates both solar arrays and battery storage system and automatically kicks in the backup generators on the rare occasions they may be required. There are options to utilise different programs depending on the time of year and how many people are on site at the time.

Underground cables have been installed throughout the village, with 2 and a half tonnes of cables pulled up the very steep hill to the ground mount system, presenting quite a challenge for the installation team.

You can learn more about the project from the Licola Wilderness Village video below.